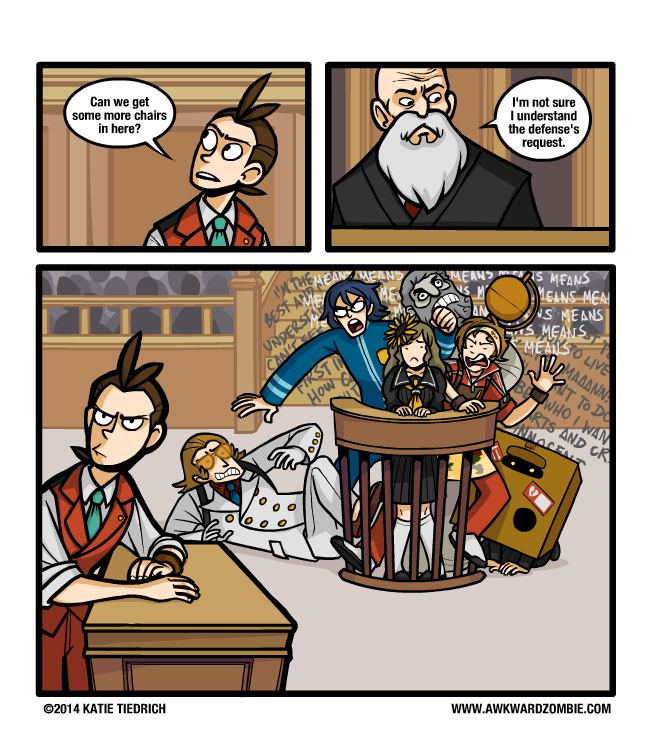 Witless Stand
Posted April 20, 2014 at 8:00 pm
When I play games that are heavy on text and light on animation, my brain tends to fill in the missing choreography, because I think it's incredibly awkward for scenes to play out with the characters moving nothing but their mouths.

The Ace Attorney games have traditionally placed anyone who isn't a lawyer or a judge on the combination witness stand/defendant seat, because drawing sprites is hard. LIKE A LOT OF THINGS, this was pretty unnoticeable in the series's earlier games, where cases had like four people, tops, but the recent installations have more sprawling casts, and the court sections of the games sometimes have everyone in the story taking part in the same conversation, with almost all of them apparently sharing the same point in space.

My brain tends to interpret this as a character taking the stand and saying something only to be immediately shoved aside by someone else, ad infinitum.


PEOPLE OF WISCONSIN: reminder that I'll be at No Brand Con this weekend! That's in Eau Claire! More like WOW CLAIRE, WE BETTER GET DOWN THERE AND EXPERIENCE SOME ANIMES
PRIVACY POLICY