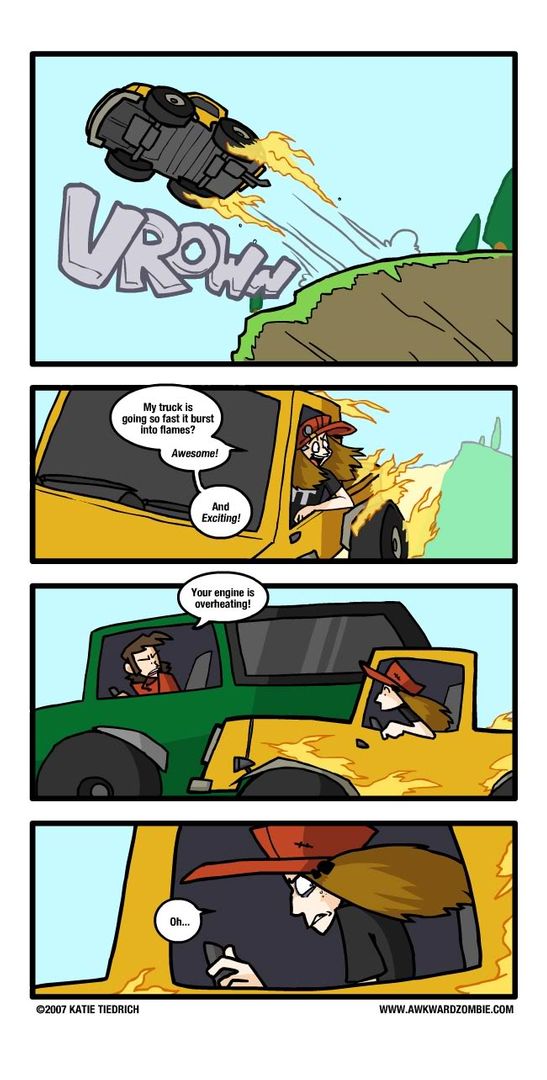 Oh, the Excitement
Posted February 11, 2007 at 7:00 pm
Add cars to the list of things I can't draw.
So I got ExciteTruck a couple weeks ago.
I enjoyed its bikier predecessors, and I cannot pass up the promise of trucks and excitement sharing one environment (who could?). This, combined with a soundtrack made up of a single electric guitar loop and jets of fire shooting out of every orifice on the vehicles definitely lives up to the manliness factor.
Seriously. Every level has the same music, and it's just one guitar riff over and over again. This would be very inconvenient if the game didn't have one of them fancy \"make your own soundtrack\" features, where you can upload .mp3s of your own crap to be played instead and it is awesome. So it's okay.
If fire determines how cool a game is, ExciteTruck is cool.
If you get a speed boost, your car catches on fire.
If your engine explodes, your car catches on fire.
If you park in a no-parking zone, your car catches on fire.
Discerning good fire from bad fire can be challenging.
As for the magical tilt-sensing controls: I think they work pretty well. I'm not a huge racing game enthusiast, but it's much easier to get pulled into a game where physically leaning into turns is functional and doesn't just make you look like a chump.
The game seems kinda short, but what it does have is pulled off alright. Except multiplayer is only two-player, which is LAME.
I'm not really liking this comic, but I've been busy working on this here website so shut your face.
PRIVACY POLICY