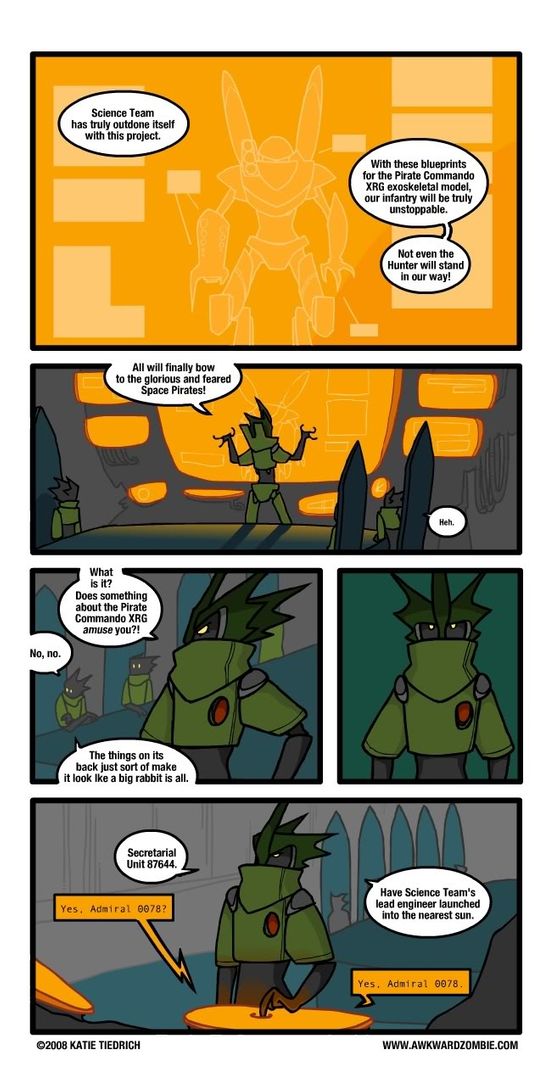 Lagomorph
Posted October 12, 2008 at 8:00 pm
As much as I love Space Pirates -- which is a lot -- I am not usually enthused about drawing them. To tell the truth, I usually just forget what they're supposed to look like. There is almost no reference material out there on the Innernets to go on and all my in-game memories of what they look like is clouded by the terror-driven frenzy of \"OH GOD SOMETHING IN THIS ROOM IS MOVING I MUST SHOOT IT\".
Recognizing them in the Prime series became a matter of simple shape identification, and I think something is fundamentally wrong when I am driven to associate an alien death squad with a pack of bunnies.
In an unrelated story, it's also really hard to anthropomorphize them Pirates. They're all shrieky and hunched and alien and then you read their datalogs and they sound like they were written by a species with, I don't know, opposable thumbs. I dread the day I make myself draw a member of the Spoken Of Only In Whispers Science Team, and it's going to be a lobster-clawed mutant in a lab coat and glasses.
PRIVACY POLICY