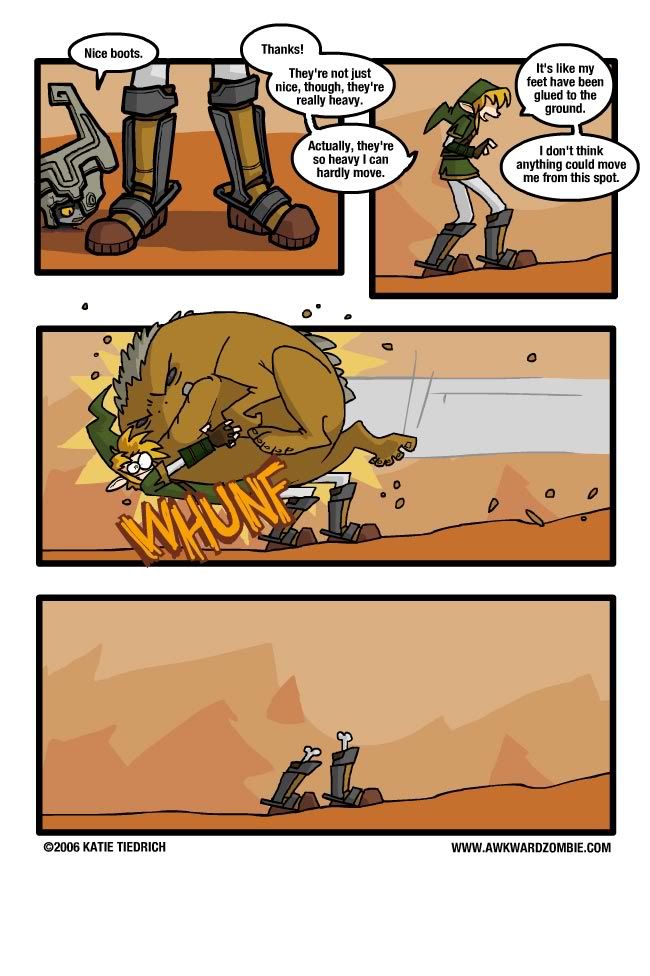 Anchorfeet
Posted December 13, 2006 at 7:00 pm
Yes, as you know if you've seen any of the trailers, both the Iron Boots and the (poorly-drawn)
Gorons return in Twilight Princess. So I didn't spoil anything.
For real, I am conscious of you poor fools who haven't played it yet. I would not want to harm
your mental state by revealing to you that, say, Midna is Link's mother, or that Zelda turns out to
be a man.
Was I joking? You don't know!
...
Oh, and because people keep ragging on me for it: yes, I draw Midna with her left eye covered.
Perhaps you commoners don't know it, but the Wii version of Twilight Princess was completely
flipped so that Link could be righthanded. All for you starboard freaks. This means that
everything in the game is mirrored; every other character in the game is lefthanded, Hyrule is
geographically lopsided, Midna's helmet is covering her other eye, blah blah blah.
Some people may logically conclude \"Okay, so just draw it that way\", but no! The
GameCube version is still unmirrored, and Link remains lefthanded in SSB: Brawl and all concept art.
I will continue to draw them as they were originally drawn, and I will also continue to
overimplement italics.
PRIVACY POLICY