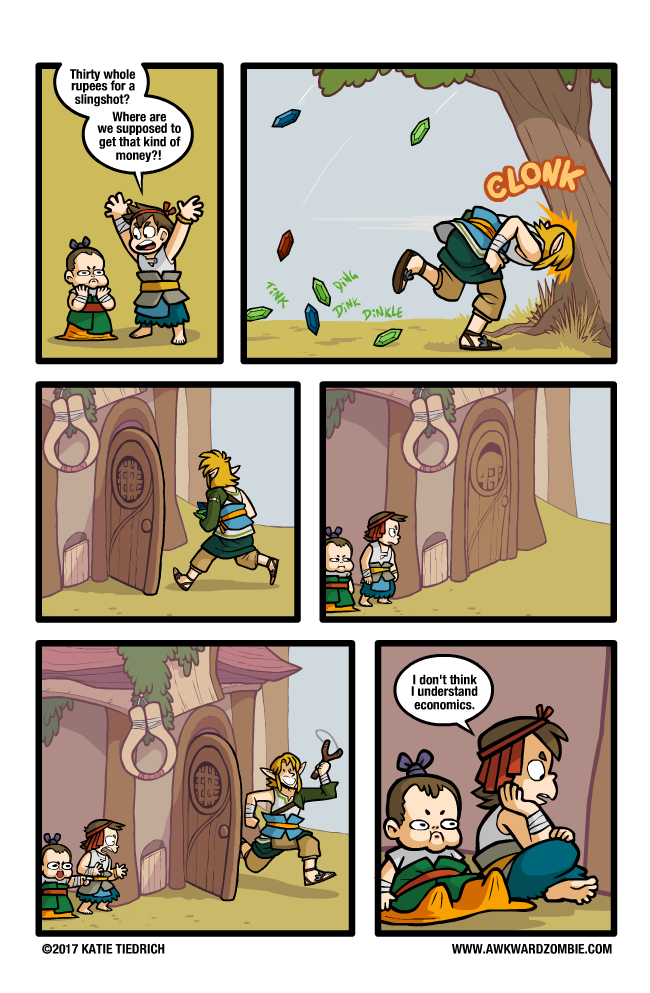 In a world where you can turn over any rock and find a dollar, I don't know why anyone even attempts the facade of a currency-based economy.

Better yet, you can find frogs under rocks in Breath of the Wild!
Top

StormiestPlayer
Posts: 72
Joined: Sat Jul 11, 2015 7:39 am
Location: I'm everywhere. I'm in your cereal and in your closet and under your bed. EATING YOUR NUTELLA!

I have tricked you -- you thought I was going to draw a comic about a Zelda game, but I have cleverly drawn a comic about a different Zelda game. (I drew this before Breath of the Wild came out, when I was revisiting Twilight Princess HD.)

In a world where you can turn over any rock and find a dollar, I don't know why anyone even attempts the facade of a currency-based economy.


Makes you think about how many super-old comics Katie has in her backlog. We should have a festival in which Katie uploads her oldest comics regularly. If she has that many.

What are these pillow things that the townsfolk in Zelda games often wear?
Last edited by StormiestPlayer on Mon Apr 03, 2017 8:01 pm, edited 4 times in total.
Being bad at something is the first step to being not-bad at something.
Top

Also makes you thinka bout how long ago she mustve played MGS5 if theyre still showing up after Breath of the Wild.
WHERE IS THIS MERLIN I KEEP HEARING OF

The name of the comic is Investment Bonking, but in the comic, the sound is Clonk
I can't understand this

SirRob wrote:The name of the comic is Investment Bonking, but in the comic, the sound is Clonk
I can't understand this
[snip image

Because hitting your head is sometimes referred to as "bonking your head".
The gayest girl you know.
Top

Is this what led Malo down the path to becoming Hyrule's richest entrepreneur?
Top I think the title for the comic would fit better with a TF2 comic, but Scout doesn't have any real moneymaking bats. And now it's about Zelda 2! StormiestPlayer wrote: What are these pillow things that the townsfolk in Zelda games often wear?


You're talking about this thing, right? To my knowledge, in Chinese it's called Pao Tue (or Pao Du), which translates to 'belly robe'. It was originally part of a soldier's uniform in the Tang dynasty to keep their weapons from rubbing against their armor and was gradually adopted as a fashion statement by civilians during the Song dynasty.

Similar pieces of armor from other parts of the world are the fauld and tasset belt, but these are both made of metal instead of fabric and don't come up past the belt.

Well, any cash left over from his little shopping spree can go to his account at the First National I do not have time for such websites as I am looking for essay writing service reviews right now. I want to make sure that the expert I hire for my assignment has done work for others too.
Top

Trust me you guys I had the best experience at research paper help services. Seriously it can make me impress with their every actions. Highly recommended to you guys!
Top
Post Reply
14 posts • Page 1 of 1