A screenshot Lp for the very lonely, by the very lonely. The year is 2010, robots have taken over the earth and now monitor our every action. Free will is limited, and even the very traits of our personality are handpicked by our robot masters.
To the inhabitants of this dark era, this hopeless grim future, it is... 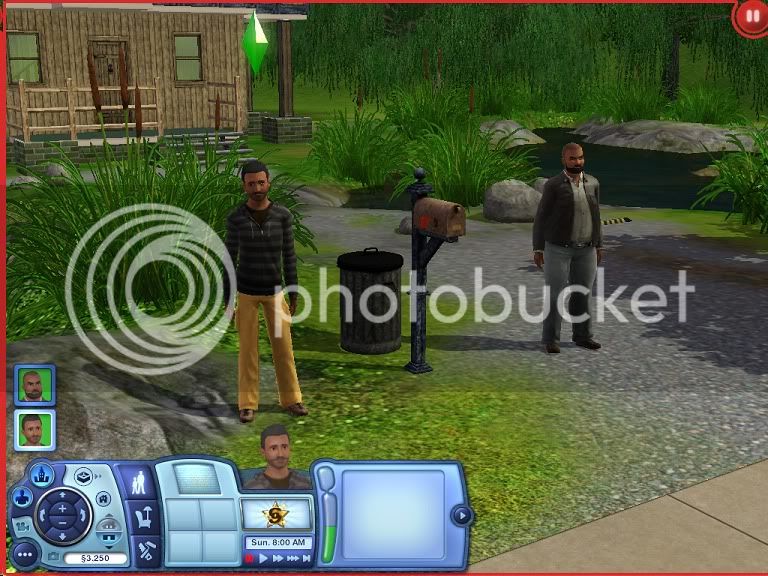 Agent Nipples has the left, while his brother Cockbag mans the right.
They're in this together, these two. 2 Caribbean brothers deported straight to the strange and unheard of "Summerset Valley", a resort for those favoured by the robotic masters.

Their home, which they purchased with around 13,000 "Simoleons" has very nice landscaping, but the house is a shack. The house will be now referred to as Westphalia, in honour of the last resistance of mankind.

Heading out to the so called "Town Hall", Nipples gets a bit desperate for love and attempts to facebattle this fine looking dame.

It doesn't go as planned for Nipples so he declares him a nemesis and beats the shit out of him, all the while being disgusted by the young boy in his presence. God how they creep him out.

Constable Cockbag arrives at the scene to sort things out and enact a little-old corruption and abuse of power in his brother's favour.

Meanwhile, Nipples attempts to steal that old fuck's wife.
He does this by trying to facebattle her and tell her funny stories. Like any real man.

Cockbag and Old fuck get down to business though, with Cockbag gaining the upperhand and winning thanks to his supreme and intimidating weight.

And then they start to dance for some reason to this old lady's terrible guitar skills.

Seriously it was so terrible that Nipples beat the ever loving shit out of her.

Agents 2 and 1 head back to Westphalia to get some R&R after a hard day of enlightening.

What should they do next, forum?
Top

Become Unlawful Good. Find out where the Old Lady lives and steal her stuff.

There are too many new people on here.


But now I have high hopes for this thread.

iamthelordhitman
Sir Lurksalot
Posts: 5867
Joined: Mon Apr 07, 2008 8:37 am
Location: I'm probably somewhere that you aren't, but you think I'm there, but you're not sure.
Contact:
Contact iamthelordhitman
AOL

this is my tf2 shit


Mr. Torgue wrote:OH SNAP, THE MONSTER I SENT YOU TO KILL, IS ACTUALLY A MONSTER TRUCK. PUNS MOTHER FUCKER.

continue to beat up old men and facebattle the ladies

you will not remember this thread tomorrow
100% Medically Accurate

Thats what happens with most of these threads.
Top

Head of The Brothel wrote:let me guess

you will not remember this thread tomorrow

More like I won't remember your mother by tomorrow oh zing I burned your face.
Top

Seduce and/or beat up neighbors
Start an oven fire
kill small orphan children
I'm going with 'be as destructive as possible'
Last edited by Pootsforever on Wed Aug 18, 2010 11:01 am, edited 1 time in total.
[url=http://www.youtube.com/watch?v=A43JOxLa5MM][img]http://i53.tinypic.com/2di3h9z.gif[/img][/url]
Top

Hey, you have one unusually large image in there that's stretching the page.

It makes it kind of annoying to read.
Top

Kill everyone
TheOtherMC:
"Snarf tiddies dont work like that"

Trygve was here.
Spoony was here.