being a necromancer sounds pretty sweet, though

You'd have to be around a lot of angry old ladies and would be in constant danger of being easily punched to death by Charlie.
Top

Just look at what happens to Nameless every other week.
Top

But with Necromancy, you can punch people to death, resurrect them, and then punch them to death again.
Top

Use the staff on nameless
Top

Urghhhh. Being the Arch-Mage is gonna suck. I already fixed the Necromancer problem, which means that the guild will be focusing on other things like "research" or "not violence".

I HATE THOSE THINGS.

And I'm probably gonna get all the paper-work. Great. Just great.

If only there was some way I could-

If everyone is dead, then I won't have to be the Arch-Mage because there will be no guild for me to rule!

Clearly, I have to kill each and every non-essential member of the Mage's Guild! 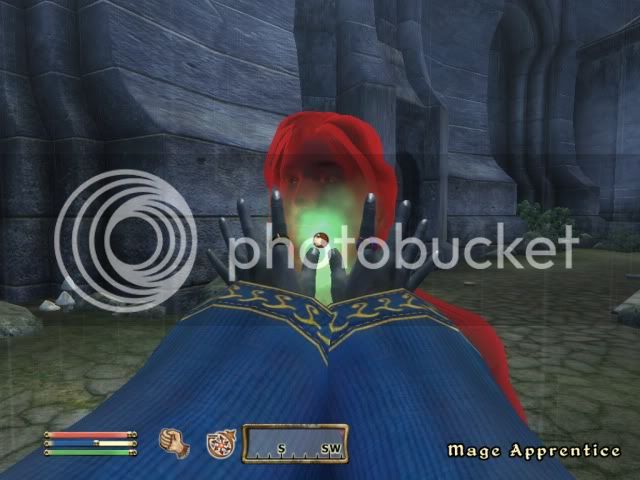 Starting with all you stupid and nameless conjurers and apprentices!

I never understand why, every time a fight breaks out in the Mage's Guild, the Punch Misers start fighting guards outside the Mage's Guild even though none of them were frenzied.

It is a mystery that will probably never be solved.

Well, that takes care of everyone outside. However, I'm sure there are still some people inside all those buildings that surround the university. I'd better find them and, as the Mage's Guild constantly put it, "root them out".

Like this lady, who is in the Chiro- The Cyranas- the Kira-

However, frenzy doesn't seem to work on her.

I can't outright kill her, even with a sneak attack, because I'll automatically be kicked out of the guild and won't be able to eliminate the rest of those in the Arcane University.

Luckily, I have a different plan.

I will simply summon a Golden Saint and then frenzy her, causing her to kill the mage!

In the practice rooms I see a pair of mages shooting at some targets.

As I always say, the best way to practice combat is to experience it!

I cast a frenzy spell on both of them.

As you can see, the guy won.

I wonder if anyone is upstairs.

...Why would there be furniture in front of the targets? That's just stupid. They're just asking for things to get broken.

The mages immediately rip their shirts off, conjure up some axes, and start trying to sever each others heads.

...You ever notice how rarely these mages actually use spells to fight?

The blonde one wins and goes downstairs.

AS A PRIZE, HE WILL NOT BE KILLED!


...Unless I change my mind later.

Also, I change back into my Amber armor, since the strength buffs and the fact that light armor does not encumber me when I wear it will help me carry all the daggers I've been looting off these mages' corpses.

I've missed this armor. I really have.

TO THE... err... whatever the hell they call the spell-making place.

Oh, you. Mister "I'm gonna hit on this guy while he's practicing his Illusion magic".

Your death will be SWIFT.

...As soon as I figure out how to kill you without getting kicked out.

I find the other guy upstairs, asleep.

Since they aren't in the same room, I can't fenzy them and have them kill each other.

Frenzy spells don't seem to work on them anyway.

Wait, I think I have an idea! 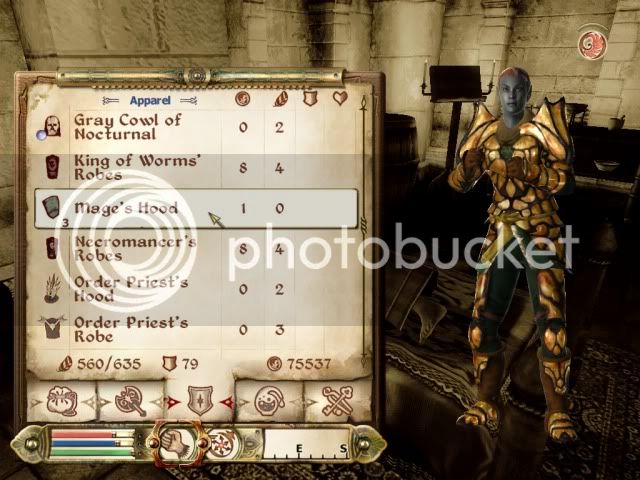 Mage's hoods are weightless, right? That means I can reverse-pickpocket them on to someone.

And the enchantment doesn't have to be pleasant.

Now, all I have to do is plant the hood on someone while they sleep, wake them up, and hope they put it on and slowly die from electric shock!

It's the perfect plan!

Let's try it on that lady from the Chiro-... enchantment place, first.

I put the hood in her inventory and wake her up.

She puts the hood on just before she goes back to bed.

She attempts to heal the shock damage away.

Soon, she is bodaciously frozen in the position, constantly healing and constantly taking damage. The noise all combines into some sort of weird buzzing sound while she pulses with electricity.

However, while she might not be moving, her health bar is definitely shrinking.

And the best part is that I can just loot the hood off her corpse and use it again!

It's the murder weapon that can be used again and again! 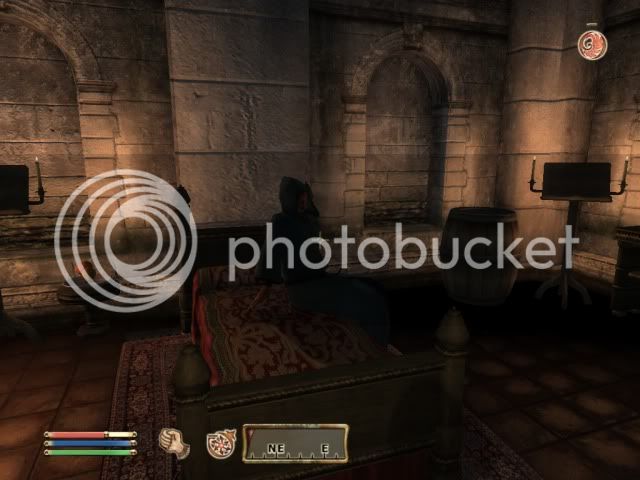 Annnnnd... he's not putting the death hood on.

Maybe I should wait until he wakes up normally. 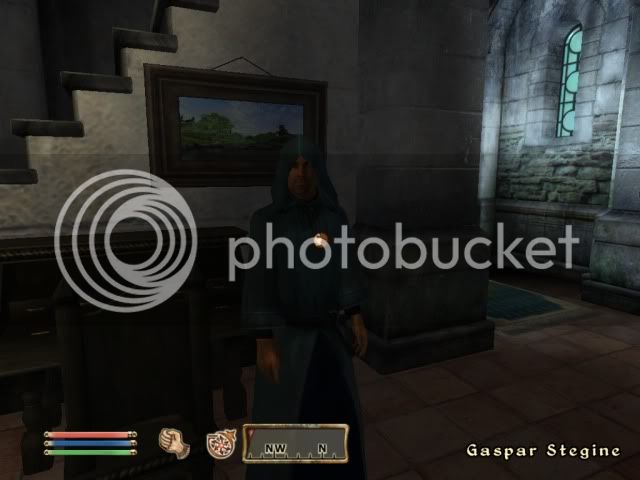 Dammit, he's still not wearing it!

Oh well. At least I can easily pickpocket it back.

Maybe it will work on the other guy, since he's not already wearing a hood.

ASOIFJSDOAF He won't put it on either!

Looks like I only have one choice. I must wait for that short time when they change shifts, which is the only time they are in the same room together. Then, I must swiftly strike and kill them both before I get kicked out.

...is about to become Gaspar the friendly ghost.

Oh, and the other guy is dead too.

I don't have a joke for him, though.

I barely have enough time to loot their corpses before I am removed from the premises.

Well, killing everyone in the university took longer than I thought.

I love doing that with hoods!
This is my signature because i am mostly a lurker, therefore i have no use for signatures.
Top

I will remember this.

Ha, that hood-reverse pickpocket trick's pretty awesome, I didn't expect it. If I ever get oblivion, I'm going to abuse it as much as possible.
Top

I still don't know why it didn't work on those two other guys.


Maybe they are scripted to only wear one thing and one thing only or something?
Top

Sometimes, at least in Fallout 3, you would have to fast travel away for the person to switch inventories.
Top

You didnt get a apprentince to follow you?
Top

Master War wrote:You didnt get a apprentince to follow you?